Buy a Microsoft volume license and save

Purchasing a Microsoft volume license for multiple PC workstations is significantly less expensive than a single license for a Windows PC. Furthermore, it offers administrative advantages when it comes to equipping an entire company with Windows software applications.

Companies that are running a Windows server acquire a license for this server from Microsoft. This is an operating system for servers, which is equivalent to a single PC Windows operating system. A volume license is required in order to be able to provide multiple workstations with Windows applications from this server.

What is the Microsoft volume license?

Microsoft volume licenses for the Windows operating system are based on different criteria than the volume licensing of multiuser application programs such as MS Office, which are used in Windows. With a volume license, you can cost-effectively bundle and license multiple devices or multiple users under a single application. Instead of procuring single licenses for each PC or server, or for each Windows user, companies purchase rights of use in a less expensive package. In doing so, they must first make a preliminary decision about how they want to adjust the requisite volumes in the future.

What are the benefits of having Windows Volume Licensing for Business?

In addition to the significant cost advantage over single licenses, Microsoft volume licenses include additional security options specifically designed to protect company-wide networks from external attacks. Likewise, a company’s IT manager doesn’t need to enter a license key for each individual workstation, but instead receives a single volume license key, which can be used to grant access to all clients.

Windows volume licensing ensures that all users in a client-server network are able to work in consistent, up-to-date software environments. In this way, volume licenses make the uniform organisation of PC workstations possible. Instead of installing a Microsoft application individually on each PC, more and more economical VDI solutions are being used: virtual desktop infrastructures that enable the company to provide a uniform user interface for each workstation, and to administer the applications centrally.

Which Microsoft volume license is right for your business?

In addition to licensing the Windows server itself, numerous Microsoft servers also require the licensing of a fixed number of devices or users, who have access to the applications on the hosts. The decision as to which alternative is less expensive depends on how your company’s IT systems are organised.

If a workstation is operated by changing personnel, for example, it would make sense to set up a Windows CAL license according to the number of PCs. If the number of employees who should have access to a Windows application clearly outweighs the number of devices, device-oriented licensing is the best choice.
◾ Conversely: If a small number of employees use multiple devices, such as a desktop PC in the office, a notebook later when they are in transit, and in addition, smartphones and tablets to access the Windows server, user-oriented licensing is the more economical option.

It is possible to divide such solutions by business divisions if, instead of one central server, multiple servers are being used, each for different applications or departments.

Get a Microsoft volume license at VENDOSOFT

You will require volume licenses for Windows whenever you want to provide employees at your company with access to the appropriate Microsoft applications via RDS solutions (Remote Desktop Services) or via VDI solutions. Get your volume license from the used software specialists at VENDOSOFT and enjoy additional benefits:

You will find information HERE about cost-effective used Microsoft volume licenses from VENDOSOFT!

We are here to provide all the information you need about used software.
Personal and professional. 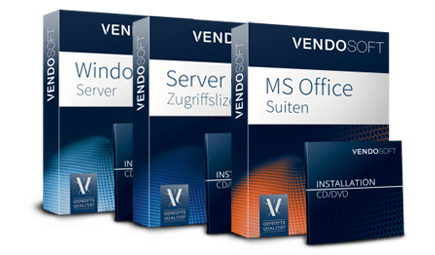